It made me really angry to hear that bully boy supermarkets are bypassing FairTrade to set up their own watered down version. Shame on you Sainsbury's, Tesco, and any others who want to be unfair! 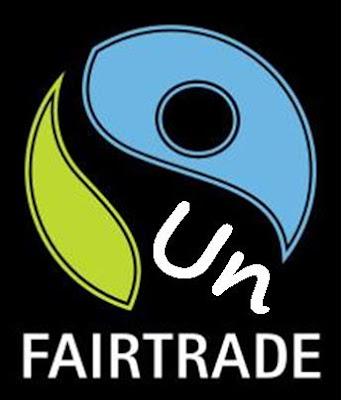 I immediately emailed the two key people involved telling them they would lose me if they lose FairTrade, and that I would do all in my power to take as many with me as possible. I'll give you their contact details at the end. To be fair to Sainsbury's I had a reply informing me they sell more FairTrade than any other outlet, and that their pilot Fairly Traded tea scheme "aims to boost tea farmers' resilience and ability to adapt".

So what are the facts about FairTrade being challenged? It should thrive, because that's its purpose! The foundation exists to "denounce the deceit and corruption of evil" to quote from our baptism promises. 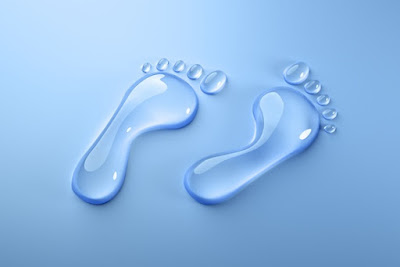 It only has credibility because it demands that producers receive fair dues for their work, and that greed is curtailed. Not only that, it does this in the market place of ideas, as well as through competitive products.

On the other hand blind market forces are "good at creating wealth, but poor at distributing wealth" to quote Lord Sacks. Or as Rutger Bregman pithily put it "Wealth isn’t created at the top. It is merely devoured there".

If the Sainsbury's scheme is such an improvement, why is it being imposed on producers? Surely that is in itself unfair. There is no detail in the claim that the pilot will improve resilience and adaptability; why not? By being greedy, it could so easily lose its fine reputation for Faitrade. What a waste.

We can challenge the ethics of Tesco, or Sainsbury's as shareholders [if we are], as consumers, and in the market place of ideas. Let's stand up for justice. That's what is required of us, "Do justice, love kindness, and walk humble with your God", to quote Micah chapter 6, verse 8. These words are beautifully carved on St Osmund's chancel screen.

You and I can make a huge difference, and might pick up the whiff of fingers burned. I invite you to get in touch with these two:
Mike.Coupe@sainsburys.co.uk
john.allan@uk.tesco.com


Posted by Weymouth Ridgeway Rector at 15:05 No comments:

France, and now Britain
There have been three recent terrorist attacks: Westminster, Manchester, and London Bridge with Borough Market. As far as we know all perpetrators were home grown, so the government is encouraging leaders to take part in online Prevent training. I've completed mine, as shown in this certificate. 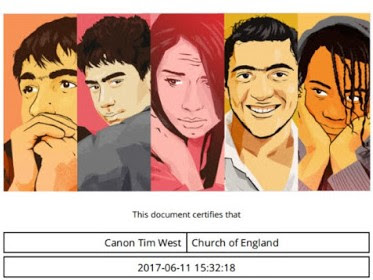 The training pitches at the level you choose, includes graphics, multiple choices, and video clips. It encourages us to notice any unusual behaviour, check respectfully with others, and put in place groups and conversations that encourage reflection. It does not seek to introduce another layer of 'monitoring', but trusts existing relationships.

Why not look at the material yourself? It's on www.elearning.prevent.homeoffice.gov.uk

An exciting election
I've never known an election campaign significantly change poll forecasts like the one last month. The movement in the final weeks was dramatic, and by all accounts due to the large numbers of young people becoming 'radicalised' enough to vote. Social media and personal contacts made a huge difference, and few saw the swing coming.

A good turnout should be measured by quality as well as quantity. The overall number was up, and represented a more balanced cross-section of the electorate. That was good for democracy.

It just goes to show that we can empower others to take positive action. This must balance an understandable focus on those who callously kill or maim. Funnily enough, if we're really radical it means taking our roots seriously. Terrorism can't be justified by the Koran, and nor could the Crusades be justified by the Bible.

Making a difference
Why do you want this job? And the answer made sense: I want to make a difference in the local community. You and I can influence and encourage all that is good, and prevent evil. It takes honest respectful debate, humour, and care with the truth. And it makes things change. 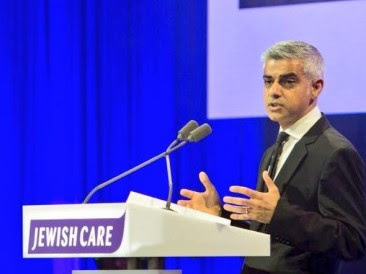 Donald Trump's response to the London Bridge atrocities was to attack the Mayor of London, Sadiq Khan. What crass cowardice. I for one am delighted that Trump has postponed his trip to London because he is worried about protest. I signed the petition to Parliament which called for the invitation to be withdrawn. Khan has been working hard on security, and consulted Jewish authorities among others. We can make a difference for good!
Posted by Weymouth Ridgeway Rector at 10:51 No comments: