Our family recently did a joint video version of the Lion Hunt, where everyone copies the leader's actions and chant 'Can't go round it, can't go over it, have to go through it!'. There follow sound effects of climbing trees, crossing bridges, going through swamps etc to discover a cave where the lion is hiding and waiting for them. At high speed the petrified troupe have to reverse all the sounds in the right order until reaching the safety of home. 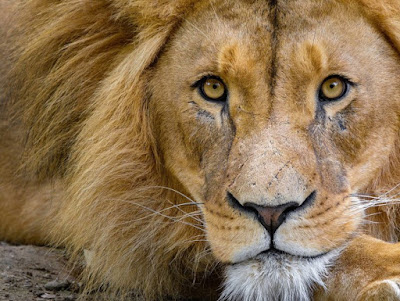 The Coronavirus Challenge is one for the whole world, alongside halting climate change, stopping littering, and vastly reducing waste. We've got to go through it and, unlike the lion hunt, can't reverse things at high speed. Socialising at a distance is to be part of the new norm, but thank God for all the contacts we've been enjoying through the web. Incidentally, please keep a lookout for those who can't join in, and who won't have a printed Register this month.

Sorry there was no View from me last time; I was incredibly busy trying to establish a pattern for Phase 1, and coping with the immense privilege of many mini-funerals. Incidentally they are honouring, heartbreaking, and at times intimate [at a distance, so no panic!?], even fun. it's so amazing to give thanks to the Almighty for the miracle of life.

If you've not found it yet I'm on Facebook as canon.tim.west and normally post a couple of times each day. If you're not on Facebook then let me know you email address, and I can send you a link [bcc to protect your privacy]. A video link just needs to be opened, and you're away without having to join Facebook. 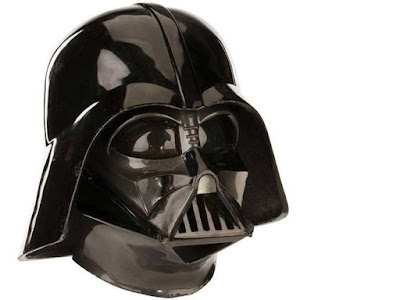 Coronavirus Challenge Phase 2 is likely to include masks [Darth Vader or otherwise!?], and will mean socialising at a distance. We will evolve slowly. This applies to worship events too. Each setting is different, so solutions will be unique for ages, locations, and type of worship. It is unlikely that Holy Communion will be distributed conventionally until a vaccine has taken effect, however many have received the simple symbols of bread and wine at home while watching one of my Sunday posts.

Love never recognises boundaries, whether time, space, virus, or anything else. As St Paul put it in his famous Poem 'Love never ends' [1 Corinthians 13.8]. Jesus described himself as the Way, Truth, and Life.

May he be our leader on this hunt for a better future.

Posted by Weymouth Ridgeway Rector at 19:36 No comments:

Being a selfish hypocrite

The Lent course for Ridgeway Churches has been brilliant because imaginative, participatory, realistic, diverse, and honest. One session comes to mind. We were considering becoming carbon neutral by 2030, and realised that we could be hypocritically smug. Why? It all began at Ironbridge. 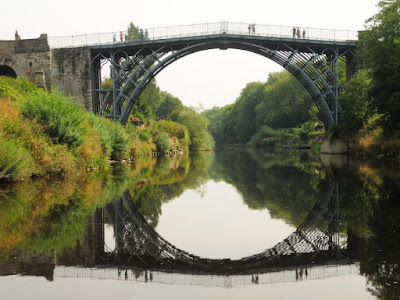 Great Britain exported the industrial revolution across the world, and stoked a seemingly insatiable appetite for the earth's resources. Last year was the highest demand since records began. We have to be honest with ourselves because we should take into account our historical debt. We need to absorb carbon dioxide to play a fair role in respecting nature.

The situation is serious, as shown by the increasing abnormal weather events. Temporary flood barriers gave way at Ironbridge, and we should spare a thought for thousands whose homes have been devastated, and for many farmers unable to work the land. 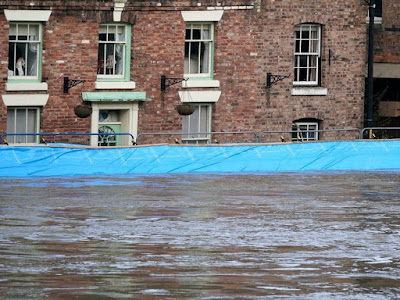 The Lent group has recommended that our Churches appoint Parish Eco-Warriors [PEWs] to keep us up to scratch. Rightly, we take welcome and care of each other seriously [safeguarding], so why not do the same for our planet?

Jesus talked about those looking at a speck in someone else's eye without realising they had a plank in their own. His exaggeration makes the point powerfully. We can too easily pontificate without accepting responsibility for our own actions. I found the Lent group really challenged my outlook.

Posted by Weymouth Ridgeway Rector at 15:40 No comments:

I'll have mixed emotions when I first receive a Brexit 50p coin, and perhaps that's exactly right. We've been told to choose one option or the other: in or out, control or influence, border or not. 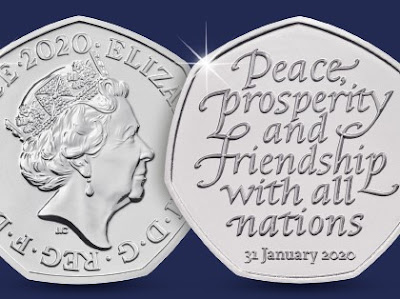 Jesus' actions were challenged by a trick binary choice: should he pay taxes to the emperor or not. He asked for a coin [Matthew 22.15-22] and flagged up that it had two sides, one bearing the emperor's head. He argued that his challengers had responsibilities both to God and to the emperor.

It is unclear quite where the United Kingdom goes from here, but whatever the outcome it should include a balance between all our responsibilities. Open debate is essential, and the disturbing trend in government of avoiding scrutiny is a dangerous path. Jesus responded to questions, and asked many himself. 'Speaking truth to power' is the motto of the United Nations; we all need to be held to account.

The famous engineer Isambard Kingdom Brunel's father believed that he could build a tunnel from Kent to France. As I understand it the Chunnel actually starts at the original site of what proved to be a hopelessly optimistic attempt. He had belief but his actions didn't bare it out.

Several generations after that failure tunnelling machines working from France and Britain met under the English Channel. 25 years later an average of 60,000 passengers pass through the tunnel each day, along with 4,600 trucks, 140 coaches and 7,300 cars; that's about a quarter of our continental trade.

The faith of many thousands involved was demonstrated by their actions in turning their collective belief into reality. It wasn't easy, but adventures rarely are. However, they left an amazing legacy, and a fine example of greener travel because it's powered without using carbon fuels.

You and I won't build a tunnel, but the small details of our living can present the same challenge: will we #makeadifference by demonstrating our beliefs through action? I thank God so many do, and add my hearty encouragement.
Posted by Weymouth Ridgeway Rector at 10:52 No comments:

Robust romance leads to adventure, so if I send or receive a fleeting gesture on Valentine's Day it's unlikely to be remembered. On the other hand if I live in a grace-full way as opposed to a grace-less one, then life will be more exciting and rewarding. 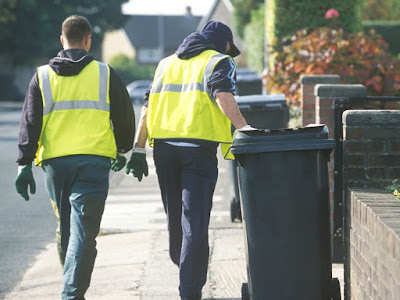 After Christmas I try to thank any 'recycling operatives', the fantastic people clearing away the tons of rubbish after our celebrations. They are often cheery, even though only getting one or two days holiday. So much of what they collect is the residue of fleeting gestures.

The amazing lego kits will be built, jigsaws done, internet bombarded with a myriad of new devices ... and what will last? Imagination to create something different from all those coloured bricks; websites giving inspiration, perspective, and humour; and above all relationships that evolve with generosity.

In September 2018 I bought some bamboo toothbrushes [as if only cleaning one tooth?!]. I was delighted to be asked in a pub what had happened to them. Well, the spent brushes didn't go to landfill; instead I used them as kindling to light the wood burner. It felt good not to add more plastic to the environment. 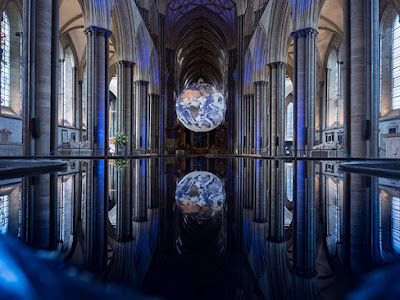 At first sight this stunning picture makes it look like Salisbury Cathedral is flooded; in fact the reflection is on water filling the font. The image reminds us of our relationship with nature. Will we be graceful towards her beauty and power, or treat her as a dump?

Half hour worship by candlelight takes place in St Andrew's at 7.30pm on Tuesdays and Fridays. We've just finished a series on marriage, and celebrated a core part of life which needs support from everyone, whether married or not. Some of the wisest counsellors are single and can see the wood from the trees.

In in all our relationships with each ourselves, with other, with different cultures, and with nature may we seek the greatest fulfilment. Jesus' first miracle was to turn water into wine at a wedding. He blessed adventure.
Posted by Weymouth Ridgeway Rector at 16:01 No comments: