As a child, the smell of pine needles and sea air triggered excitement at an approaching time on the beach. We would run down the snicket with buckets and spades. However, there were constant calls to look out for dog's mess, which created a third but unwelcomed smell. 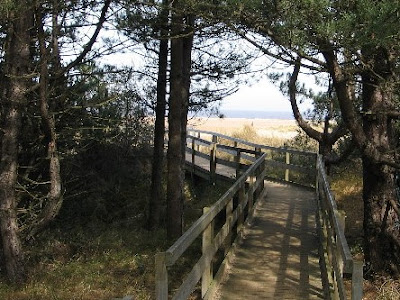 Go down that path now and the contributions from dogs have all but disappeared. It's a trite example [unless you're a parent cleaning off contaminant] which shows that some aspects of life have improved. Unfortunately we litter like there's no tomorrow.

There's a great deal of positive work going on to check plastic pollution, and it's recognised as a challenge for mankind as a whole. You and I can make a difference. Small changes multiplied over and over really do count. By the way, my wooden toothbrushes are working fine [see my March View]. Every step brings a little more of heaven to earth.

Marie Curie was excited by the discovery of radiation, and spent a huge effort refining radium until she had a concentrated file of it which she carried about in her handbag. At supper parties she would open the bag to show off the blue glow. What she didn't realise is that the radiation was killing her, and possibly her guests. She died of cancer, and in her memory an excellent charity exists to this day.

Nowadays radiation is handled safely, and is a fantastic tool in the hands of medics. It supplies us with roughly 25% of our electricity, thanks to the work of those in the early days of the Winfrith site. It took around 120 years to understand what nuclear radiation is, and how to harness it.

Resurrection was discovered by another woman, Mary Magdelene [as told in John chapter 20]. Some of the earliest writings in the New Testament show that the phenomenon was poorly understood. St Paul implied that it was hardly worth holding down your day job, because Jesus was about to return.

120 years later writers of the New Testament see the resurrection of Jesus as demonstrating love is stronger than death. It wasn't an extension of Jesus' life, but a quality of living that knows no end. It gave us forgiveness that we could make fresh starts, and write a wholesome story with our lives, a touch of earth as it is in heaven.

Posted by Weymouth Ridgeway Rector at 17:16 No comments: